It was a successful return to golf for some PGA Tour professionals on the weekend as the Sentry Tournament of Champions went off without a hitch in Hawaii. We stay on the island this week as we head to the Waialae Country Club for the annual Sony Open. The action gets underway on Friday morning (Australian time) and continues throughout the weekend. We have a full preview and betting tips for the action below.

It was Harris English who took out the Sentry Tournament of Champions on the weekend, defeating Joaquin Neimann in a playoff to win his 3rd PGA Tour title. 32 of the 45 strong field that competed in the Tournament of Champions last week will be back in action in the Sony Open this starting Friday, headlined by some of the top players in the world.

Five major winners will be competing in the Sony Open this year in Collin Morikawa, Jimmy Walker, Sergio Garcia, Patrick Reed and Zach Jonshon while five of the top 10 ranked players on the FedEx Cup standings will be looking to improve their position.

The top names in terms of star-power who will be teeing it up on Friday include the likes of Hideki Matsuyama, Kevin Kisner, Adam Scott, Marc Leishman, Viktor Hovland, Matt Kuchar, Webb Simpson and Si Woo Kim. 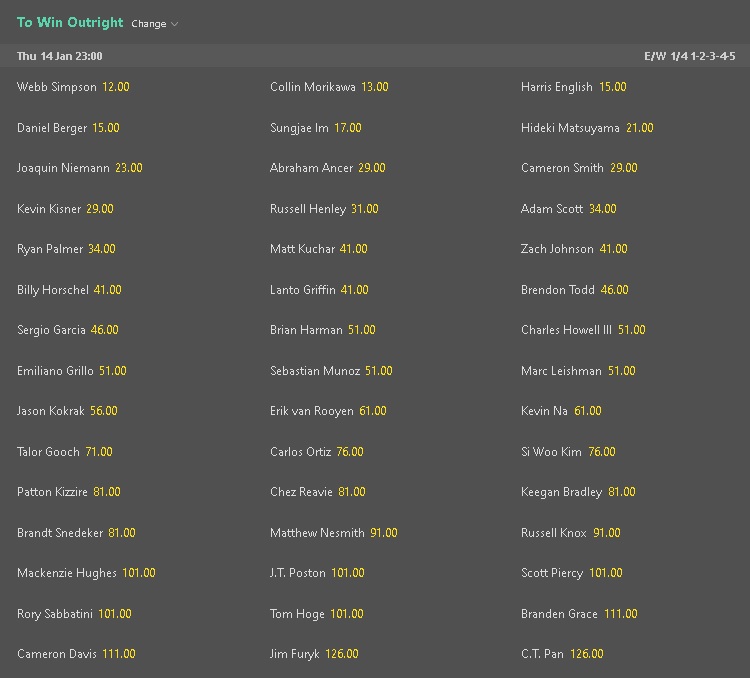 Waialae Country Club in Honolulu was designed by Seth Raynor and opened for play in 1927. It plays as a Par 70 at just over 7,044 yards and is a contrast to last week’s very hilly course in Kapalua. It plays much shorter and tighter than the Tournament of Champions course, and will definitely not favour the longer hitters as much as it did last week.

Scoring well at Waialae is dependent on strong course management and also the strength of the wind on any given day. Like any island course, the layout is right next to the water, maining wind conditions can be particularly tricky at times. The winning score at the Sony Open in the past five years has been as high as -27 and as low as -11 because of the wind.

The reigning champion who will be back to defend his title this week is Australian Cameron Smith. Smith won his 2nd PGA Tour title at the Sony Open last season in a playoff over Brendan Steele and since then has been in pretty great form despite the absence of another win. In the new PGA Tour season alone, Smith has already played six official events and racked up finished of T38 at the U.S. Open, T2 at the Masters as well as a T24, 11th, T4 and a T24 at the other PGA Tour sanctioned events.

The defending champion has teed off in the Sony Open for the past five years straight and after missing the cut in his first appearance, he has made the cut the following four years, culminating in a win in 2020. The Aussie is great value to go back to back here.

If you’re hunting some more value this week then we really like the look of Charles Howell. Howell has been a mainstay at the Sony Open for almost two decades, competing in every single tournament at Waialae since 2002. In that span, he has made 19 appearances and finished in the top 10 on ten different occasions. A win can’t be far away for Howell, who has finished in the top five seven times without a win at the Sony Open.

We’re absolutely rolling with our NBA betting tips at the moment and are confident we have some more winning plays for you on Tuesday. Catch our best spread and player prop tips for FREE right here! read more

Round 5 of the 2021 AFL season kicks off on Thursday night with the Saints hosting the Tigers in what is a highly anticipated 'Maddie's Match'. As usual, we have you covered with a preview and betting tips for every game in Round 5 of the AFL season here! read more

Michael Lee is back to kick off the week in esports with a massive article featuring not three but four best bets this Monday, the 12th of April! In this edition, he focuses in on the ESL Meisterschaft: Spring 2021 and the ESEA Season 36: Premier Division - Australia for his best bets. read more

The extended weekend of football over the Easter weekend brought some entertaining matches and some surprise results with Sydney and Melbourne both undefeated after three rounds of action. Check out who the star performers were with our Round 3 Brownlow vote predictions. read more

Round 2 of the 2021 AFL season produced a couple of thrilling finishes and the cream is rising to the top early on the Brownlow Medal leaderboard. Check out our analysis and Brownlow vote predictions for Round 2 of the season here. read more

The first round of the 2021 AFL season is in the books with some stellar performances to start the season which will be sure to attract the eye of the umpires. Who will get the Round 1 Brownlow votes? Every week we'll have analysis and Brownlow vote predictions for every match of the 2021 season. read more